What happens when Credit/Debit card is Swiped?

You would have often seen people using cards in shops. They buy things, at the counter they give a card to shopkeeper who swipes the card on a machine, gives a receipt and people walk off with their things without paying any money seemingly.  Let’s understand what happens when a credit card is swiped, how does the card is approved, who all are involved?

Let’s take the example of Mr Kumar using his credit card. Mr.Kumar wants to buy a Sony T.V with SBI credit card (a MasterCard affiliated). The shopkeeper at Sony Showroom swipes the SBI Master card on a machine provided by ICICI bank.

The video which shows how the credit card swipe works, click here.

1. When the merchant/shopkeeper at Sony World, swipes Mr Kumars SBI credit card on a machine provided by ICICI bank. The machine dials a stored telephone number via a modem to call to the acquirer bank, ICICI bank in our example, sending details of purchase such as Cardholder name, number, date of expiry of a card, amount of money that Mr Kumar has to pay and merchant id.

2. The acquirer, ICICI bank contacts SBI bank through MasterCard network. It asks for the validity of credit card and the credit limit. SBI Card approves or rejects the transaction. This step is shown as Step 1 in the picture below.

Steps of when credit card is swiped 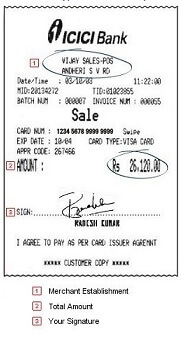 For using the swiping machine of ICICI bank, a merchant will have to pay ICICI bank Merchant Discount Fee.

5. SBI bank will send the credit card statement to Mr Kumar. Mr Kumar will then repay Rs 20,000 to SBI bank.

Video explaining What happens when a credit card is swiped

Why do people use credit cards

Customers like Mr Kumar use a credit card because it is so convenient. As the famous advertisement of MasterCard goes: “There are some things money can’t buy. For everything else, there’s MasterCard.”

The word credit comes from Latin, meaning “trust”. When you sell something to another person but give them time to pay, you trust them to pay you back.

If one sees the cards, one would see logo Visa or MasterCard. These are card associations that work behind the scenes to facilitate the card transactions. Let’s know about them a little more about these card issuing companies

MasterCard Worldwide is a multinational corporation based in the United States. Throughout the world, its principal business is to process payments between the banks of merchants and the banks of purchasers that use its “MasterCard” brand debit and credit cards to make purchases. Master card advertisements are spun around the theme ” There are some things money can’t buy. For everything else, there is MasterCard“.

RuPay is India’s own card payment network just like Visa and Master Card and provides a low-cost alternative system for banks to provide card service.

As far as most people are concerned, there is no real difference between the two. Usually, Visa card number begins with 4 while of Master Card begins with 5. For more details on numbers on credit card checkout out section They are both very widely accepted in over one hundred and fifty countries and it is very rare to find a location that will accept one but not the other. However, neither Visa nor MasterCard actually issue any credit cards themselves. They are both simply methods of payment. They rely on banks in various countries to issue credit cards that utilise these payment methods. You can find more information about Payment networks in our article Rupay card: Difference from Visa, Master, One Nation One Card