Kylie Jenner: Billionaire, Keeping Up With the Kardashians, Kylie Cosmetics

In Mar 2019, At 21, Kylie Jenner became The Youngest Self-Made Billionaire Ever.  Thanks to Kylie Cosmetics and a new deal with beauty retailer Ulta, Kylie Jenner has an estimated $1 billion fortune. “It’s the power of social media,” Jenner says. “I had such a strong reach before I was able to start anything.” Some took issue with Forbes for calling Jenner – whose ritzy upbringing was documented on “Keeping Up With the Kardashians” – “self-made.” As of 2018, with over 100 million followers, she is one of the top 10 most followed people on Instagram. Virat Kohli charges $120,000 for each Instagram post, Kylie Jenner tops the list with whopping $1mn. Who is Kylie Jenner? How is she related to Kardashians? What is the show Keeping Up With the Kardashians? What is Kylie Cosmetics?

On 4 January 2019, the @world_record_egg account was created, and posted an image of a bird egg with the caption, “Let’s set a world record together and get the most liked post on Instagram. Beating the current world record held by Kylie Jenner (18 million)! We got this.” The egg is known as Eugene. More details here

Why is Kylie so popular

The Kardashian/Jenner family already takes over every social media platform there is from Instagram to Twitter, but Kylie really stands out from the rest. Analyzing Kylie’s social media development, she went from being known as “Kim Kardashian’s little sister” to one of the biggest celebrities known for her relationships, expensive cars and her own makeup line.

Many say she is popular due to her headline-grabbing selfies, bikini pictures and photos of her lavish life. But When Kylie chose not to go public with her pregnancy, her social media went quiet, which just intrigued followers even more. She’s not afraid to shake things up trying up rainbow color hairs needs courage.

People love Kylie because not only does she live the luxury life, but she makes her social media platforms a space where she connects personally with her fans. After the launch of her makeup line, she retweets fan pictures and tweets of the products on her Twitter. Fans were crazy about this, not only was she reposting their pictures, but she was commenting and thanking them for their support.

Kylie allowed her fans into her life like no other celebrity. She constantly Snapchatted/Instagrammed what she was doing, who she’s with and what she’s wearing. Kylie’s fans are directly linked to her world and feel as if they’re there with her and she is telling them all these secrets. This connection with fans brings her closer to them, it builds a loyalty between the two. This inclusive feeling that fans get when they follow Kylie is what allowed her fan base to not only grow in numbers but also strength which is seen in the support for all her products.

Kylie uses her celebrity status and her loyal fan base with whom she interacts with every day to strengthen her business.

People buy Kylie’s stuff because they wanna be Kylie. She created a perfect body/perfect looks and sold it to people.

In one of her interview, Ref , she offered an explanation as to why her personal app beat big sister Kim’s own website in the iTunes charts.

She theorised: “I invite the cameras over and say, “Oh, hey, let’s just do this.” We do make-up tutorials and I’m laughing and talking. I know my fans are my age or younger than me, so, I just like to show my personality and show my fans my home and my dogs.”

“I get really personal. I’m on Snapchat, and I’m just like them at the end of the day. Kim’s more private. She has kids. It’s just different.”

Aside from Kylie Cosmetics, Jenner also earns money from her paid app, merchandise sold exclusively through her online store “The Kylie Shop,” two apparel lines with sister Kendall Jenner, a book series and partnerships with retail brands like Puma and Quay Australia.

“I really do feel like people don’t take me seriously as a business woman because of my age and my reputation,” Jenner said on “Life of Kylie.” “But I feel like they’re starting to. I like to prove people wrong.”

What makes Kylie Cosmetics so popular?

I can’t leave the house without lipstick. Everyone was so interested in the color I was wearing. But nothing was ever perfect for me. I just thought, Why not make my own lip kit with a liner and lipstick?

For example, the smell of the lipsticks–I knew I wanted something sweet. I was in the lab, and they gave me 12 options, and I picked my favourite (She has tied with Seed Beauty  for manufacturing )

What began as an online business selling lipstick for $29 each has earned Jenner’s makeup company Kylie Cosmetics $420 million in sales in only 18 months. It is projected to rake in $1 billion in lifetime sales by 2022. Since its launch, the brand has expanded its makeup range to eyeshadows, blushes, highlighters and brushes. A bundle of these products priced at up to $325.

The popularity behind Jenner’s products also stems from the limited number of products she makes available during each launch, which almost inevitably sells out each time.

Keeping Up With the Kardashians

Keeping Up with the Kardashians (often abbreviated KUWTK) is an American reality television series that airs on the E! cable network. The show focuses on the personal and professional lives of the Kardashian–Jenner blended family.  The series debuted on 14 Oct 2007 and has subsequently become one of the longest-running reality television series in the country.  Whether you love or hate them, the Kardashian-Jenner clan is one of the most influential families in Hollywood. They constantly set trends in beauty, fashion, and lifestyle.

In 1994, Robert rose to prominence when he defended O. J. Simpson during the O.J. Simpson trial. for the murders of Nicole Brown Simpson and Ronald Goldman. Robert died in 2003, eight weeks after being diagnosed with oesophagal cancer

The series, Keeping Up with the Kardashians, focuses mainly on sisters Kourtney, Kim, and Khloé Kardashian and their half-sisters Kendall and Kylie Jenner. It also features their parents Kris and Caitlyn Jenner (previously known as Bruce Jenner), and brother Rob Kardashian. The significant others of the Kardashian sisters have also appeared on the show, including Kourtney’s ex-boyfriend Scott Disick, Kim’s ex-husband Kris Humphries and Khloé’s ex-husband Lamar Odom and ex-boyfriend French Montana. Despite the negative reviews, Keeping Up with the Kardashians has attracted high viewership ratings, becoming one of the network’s most successful shows and winning several audience awards.

The Kardashian sisters began appearing in the media spotlight more often. In 2004, Kim became a personal stylist for recording artist Brandy Norwood. She eventually developed into a full-time stylist and was a personal shopper and stylist for actress Lindsay Lohan.

In February 2007, a home sex video that Kim made with Ray J years earlier was leaked. Vivid Entertainment bought the rights for $1 million and released the film as Kim Kardashian: Superstar on February 21. Kim sued Vivid for ownership of the tape, but dropped the suit in April 2007 settling with Vivid Entertainment for $5 million. It is often assumed that the release of the sex tape was a major contributor to the rising fame of Kim Kardashian and her family.

The series’ success has led additionally to the creation of numerous spin-off series, such as Kourtney and Kim Take Miami, Kourtney and Kim Take New York, Khloé & Lamar, Kourtney and Khloé Take The Hamptons, Dash Dolls, Rob & Chyna, and Life of Kylie. The network has also broadcast several television specials featuring special events involving members of the family and friends

Video on who are Kardashians?

This 5-minute video gives an overview of the Kardashians family

Kylie Kristen Jenner (born August 10, 1997) is an American reality television personality, model, entrepreneur, socialite and social media personality. She has starred in the E! reality television series Keeping Up with the Kardashians since 2007 and is the founder and owner of cosmetic company Kylie Cosmetics. As of 2018, with over 100 million followers, she is one of the top 10 most followed people on Instagram. Kylie Jenner is one celeb who knows how to be in the news, for good and bad reasons!

According to Forbes magazine, her net worth is $900 million. This is mainly attributed to her having 100% ownership of Kylie Cosmetics. In an August 2018 issue of Forbes, they predicted that Jenner will become the next youngest billionaire ever.

Kylie captivated cosmetics fans everywhere with the launch of three Kylie Lip Kits. Consisting of a lip liner and matt liquid lipstick, the $29 kits sold out within a minute and sent prices on resale sites soaring. Since then, her direct-to-consumer make-up range has expanded to include eyeshadows, blushes, makeup brushes and highlighters (or, as kyliecosmetics.com bills them, “kylighters”).

Kylie Jenner is on the cover of Forbes’ Aug 2018  “America’s Women Billionaires” issue, with the magazine reporting that Jenner with net worth to be roughly $900 million, is the 27th-richest self-made woman in the United States. “Another year of growth will make her the youngest self-made billionaire ever, male or female, trumping Mark Zuckerberg, who became a billionaire at age 23,” Forbes reported.

Some took issue with Forbes for calling Jenner – whose ritzy upbringing was documented on “Keeping Up With the Kardashians” – “self-made.”

“We consider any person who built her own fortune, and didn’t inherit the money, to be self-made,” Forbes’ methodology reads. “So top executives at tech firms who are compensated for helping significantly grow companies make the ranks but not second-generation-women running family businesses. For example, the richest woman in the world, Walmart heiress Alice Walton – whose net worth is estimated to be a whopping $46 billion – is not on the self-made billionaires’ list because her wealth is inherited. The richest “self-made” woman in America, ABC Supply co-founder and chairperson Diane Hendricks, is worth just one-tenth of Walton’s, at $4.8 billion.

Shares of the Snapchat sank 6.1 per cent on 22 Feb 2018, wiping out $1.3 billion in market value, following a tweet from Kylie Jenner who said she doesn’t open the app anymore. Whether it’s the demands of her newfound motherhood or the app redesign, the testament drew similar replies from her 24.5 million followers 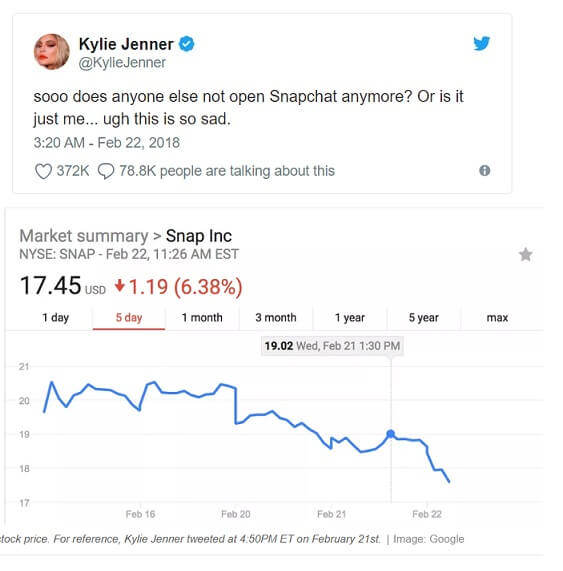 In 2012, she collaborated with the clothing brand PacSun, along with her sister Kendall, and created a line of clothing, “Kendall & Kylie”. In 2015, Jenner launched her own cosmetics line called Kylie Lip Kits, which was renamed to Kylie Cosmetics the following year. She also released a mobile app that reached number one on the iTunes App Store.

In 2014 and 2015, Time magazine listed the Jenner sisters on their list of the most influential teens in the world, citing their considerable influence among teens on social media. As of 2018, with over 100 million followers, she is one of the top 10 most followed people on Instagram. In 2017, Jenner was placed on the Forbes Celebrity 100 list, making her the youngest person to be featured on the list. Jenner starred on her own spin-off series, Life of Kylie, which premiered on E! on August 6, 2017.

As we are not taught finance at home or school we end up with half-cooked knowledge.

Details of our paid workbook on Income Tax here

Bemoneyaware is on a mission to empower 1 crore Indians to take control of their money.