Common Security Features used in Bank Notes around the World

A banknote is a paper money, comprising a cardinal or central bank promissory note to pay someone a particular sum of money on
demand. The cardinal bank varies from country to country; they are responsible for issuing currency of a particular country. Like- Reserve Bank of India (India), Reserve Bank of Australia (Australia), Bank of England (England), European Central Bank (For all European
countries- Spain, France, Italy, etc.), Federal Reserve System (USA), The People’s Bank of China, etc.

Counterfeiting of currency means an imitation of bank notes with intent to fake out. Latest growth in computer technologies and
photography, along with the accessibility to low-cost tools, has made the manufacturing of fake money easy. Just to stop the counterfeiting of money, every country is updating its currency regularly by adding technical security features to its banknote, security features are of two types’ one which can be seen by naked eyes and others require the use of equipment’s like Magnifying glass, Ultra Violet lamp, the Infra-red viewer, etc.

Many national mints have adopted similar anti-counterfeiting technologies for their banknotes which are given below. These security features make the banknote less prone to counterfeiting. These are the special features which were added either at the time of manufacturing of banknote or in the middle of the manufacturing process. These special features are paper quality, intaglio printing, watermarks, security threads, latent image, etc. Every country has their own type of security features

The type of paper that we use in our daily lives is totally different from the type of paper used in the manufacturing of a banknote, special type of paper are used in order to give longer life to a bank note and make it more complicated to counterfeit.

Polymer banknotes are banknotes made from a polymer such as biaxially oriented polypropylene (BOPP). Such notes incorporate many security features not available in paper banknotes, including the use of metameric inks. Polymer banknotes last significantly longer(average life span of about five years) than paper notes, causing a decrease in environmental impact and a reduced cost of production and replacement

Polymer banknotes were pioneered in Australia in 1988, and like Canada, many countries have made the switch to polymer including the United Kingdom, Malaysia, Chile, New Zealand, and Mexico.

India does not have Polymer notes. On 17 March 2017, the Reserve Bank of India had announced that it will do trials of plastic ₹10 notes at five locations in India, Kochi, Mysuru, Shimla, Jaipur and Bhubaneswar.

Holograms: More than 300 denominations in 97 currencies use holograms for protection, making them one of the most common security features globally. They can be incorporated into designs by the way of security threads, stripes, patches and window features.

Watermarks: One of the most common security features, watermarks are created by using different thicknesses of paper in the printing process. When hit with light, an image will be illuminated.

Microtext: Tiny text, which can only be read with a magnifying glass, is a common safety feature on many bills globally.

Security thread: Many notes use this security feature, which consists of a thin ribbon that is threaded through the note’s paper.

Invisible marks: Notes can also incorporate ink or markings that are only visible in fluorescent or infrared light, making them invisible to the naked eye.

The infographic explains the various security features in Indian Notes 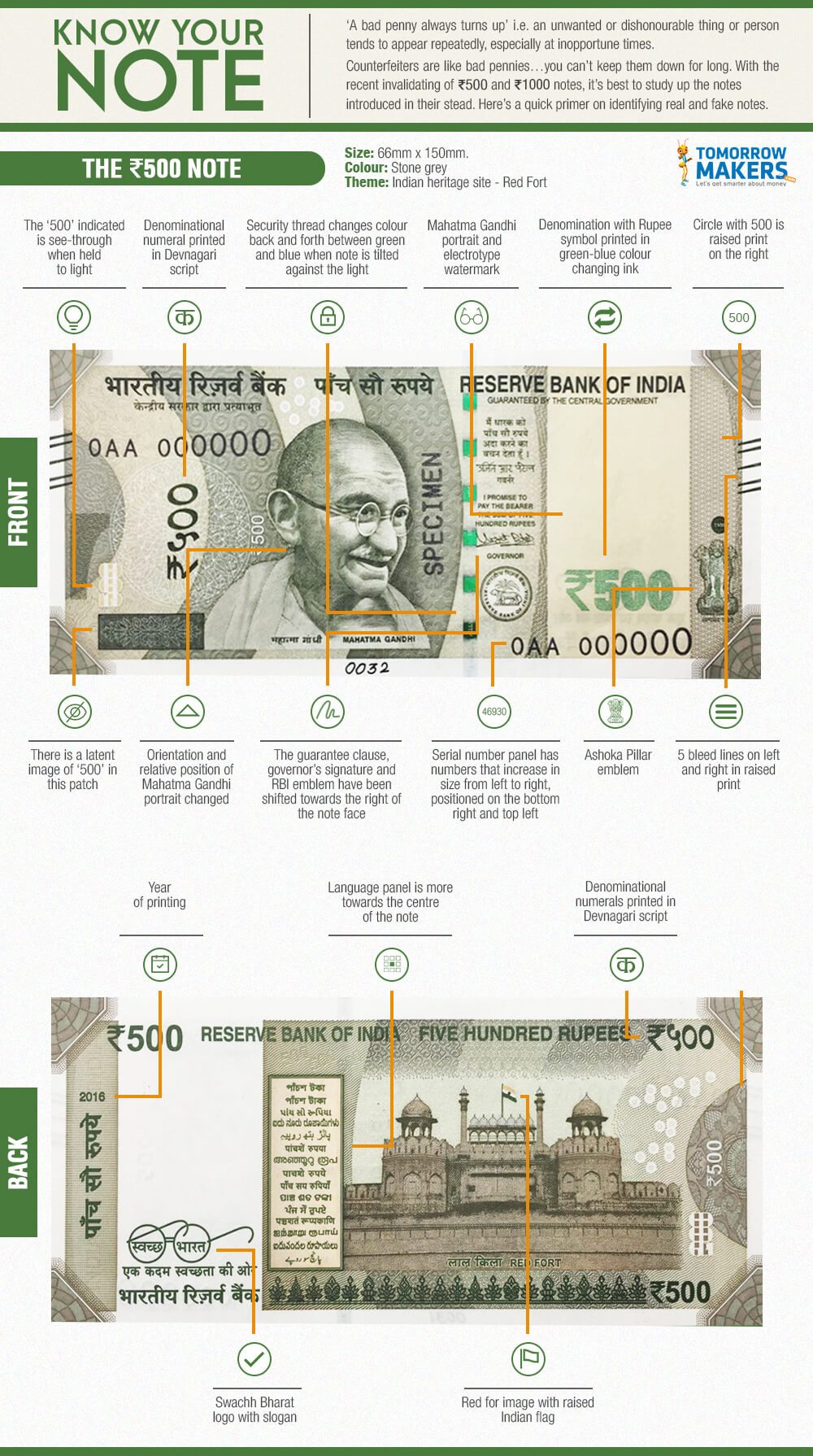 Security Features of the Indian Notes

Infographic of Security Features of Bank Notes of the World

This infographic from Visualcapitalist details 10 popular banknotes from around the world, including the anti-counterfeiting measures that have been taken for each note

Security Features in Bank Notes from around the world

How to calculate Tax on EPF Interest above 2.5 lakhs With Calculator